Franky is the seventh person to join Luffy's group. He is the shipwright of the crew and one who built and designed the Thousand Sunny. He was first introduced as the underworld boss of the infamous Franky Family in Water 7. He is a cyborg with all sorts of modifications made to his body. His dream is to build a "Dream Ship" that will sail around the world like the Oro Jackson his mentor Tom built. After the attack on Enies Lobby, Franky received a bounty of 44 million.

Franky comes as a wild card of a characters. He prefers wearing speedos to pants and likes posing even in the most inappropriate situations. While Franky may seem like tough guy most of time, he has his soft side. He established the Franky Family so that those who either homeless or have no decent jobs could have a place to be in, an act which was greatly returned by them. Whenever he is in an deeply emotional situation, he breaks out in tears but often denies crying. Overall, Franky is one of the more crazier characters in One Piece but a good guy nonetheless.

Franky's dream is to create and travel with a dream ship which would experience countless battles, can overcome extreme hardships, and can reach the end of the Grand Line. He has created the ship which the Straw Hats are riding and it's his task to keep it in good condition.

Franky's overall design is drastically different from his former self. The various changes include an increase in both height and physical strength. Along with these, various body parts have been drastically altered and given functions which would not normally associated with a regular human body. He is powered by Cola which he stores in his fridge and his most of his body is metal covered over of what appears to be his skin. With his new body, he is now practically built like a mountain.

Franky's modified body gives him alot of advantages which he can exploit. His steel body allows him to be immune to attacks such as bullets and cutting techniques, and makes his punches a lot harder. It also houses an assortment of weapons which he can use in a variety of ways. However while he is one of the stronger characters seen in One Piece, Franky's reliance on fuel to power him leaves him open to run himself dry. He can only use his more powerful attacks a few times before refuelling. This leaves him weak and helpless until he or someone else can find more fuel for him. He was also unable to reach his back when he rebuilt his body, thus while he is invincible from the front, he is vulnerable at the rear.

Franky's head is one of the more obvious signs of true nature. With various aspects such as an exposed metal nose and an three pointed chin which is called a "Butt Butt Chin", it clearly shows that he is indeed a cyborg. Aside from these however, Franky has also made some modifications to it so that his head can perform a number of functions. The functions related to his head so far consist of his mouth and his hair.

During Franky's first appearance before Luffy, it is revealed that Franky had modified his mouth so that he can breath fire. Later it is revealed he can spit out nails as well. While most of functions listed here are mouth related, it hasn't been exactly specified yet in the story as to where the 'ammo' for these functions (as well as the other ranged attack functions of Franky) come from. It has also been shown that Franky can deliver a powerful and painful bite to an opponent's head with his steel jaws in a fashion similar to that of Arlong's bite attack, when he was unable to attack in any other possible way.

Franky with an Onion hairstyle

Franky's hair has been modified so it acts as a meter of sorts for how much cola is left in his body. During Franky's fight with Fukuruo, it is revealed that depending on what type of fuel he stores, his hair will change shape. The following hairstyles that have been revealed so far in the story that Franky can have are as follows. Note however that the following hairstyle names are not the official names given by the author, Eiichiro Oda, but are names based on the appearance of the hairstyle. Their actual names if any, have yet to be revealed.

Franky's upper body, being practically the center of his entire frame work, is the area that has been modified most especially since it was the area that required the most repair. Here, he has rebuilt almost everthing with steel thus making himself impervious to most attacks such as slashes and bullets. This gives him a body similar in constitution to Mr. 1, and also puts him on par to the technique Tekkai of CP9. He has also modified it with a couple of functions that so far reside mostly in his arms.

During the fight with Fukurou, it is revealed that Franky had modified his shoulders with cannons. Below each cannon hole are the distinctive symbols BF and 36 which Franky carved in by himself to mark his thirty sixth and supposedly last creation. So far the cannons are all that have been modified onto Franky's shoulders.

During the fight with Luffy, it is revealed that Franky modified right arm mostly into a weapon somewhat similar in concept to a flail with his fist being the ball. This can be shot out in manner similar to Luffy's punches. The skin on his right hand can be removed like a glove revealing a fist of pure steel. By doing so, any punch or attack delivered by his right hand is slightly increased as the impacts delivered by his right hand are no longer softened by the skin covering it. From what has been shown has been shown in the story, he uses it for melee attacks such as punches.

During the fight with Luffy, it is revealed that Franky modified his left arm mostly to house various firearms when he performs Weapons Left. These weapons give Franky the advantage to attack an opponent from a distance but not exactly as far as Usopp. The only other modification so far, in this arm that is not ranged related is the modification to transform it to a sheild. From what has been shown has been shown in the story, he uses his left arm mostly for ranged attacks however it can still be used in melee attacks such as punching.

During the fight with Luffy, Franky performed a powerful attack that was able to damage a crane. Later when Galley-La butted into the fight, he performed it once again thus completely damaging an entire galleon under construction nearby. It is thus revealed that along the separate functions done with each arm, Franky has a number functions that can be done with both arms. The most common one that has shown so far is Coup de Vent, a function where he connects both his arms with a 'T' shaped pipe and fires a cannonball of compressed air. The Coup de Vent so far is one of Franky's most powerful functions.

After the fight between Franky and Luffy, it is revealed that Franky built a refrigerator in the area where his stomach should be when he goes to Blueno's bar to refill. This is the core of all of Franky's cyborg body as it is used to store fuel to power up all of his different functions. Up to three bottles of fuel can stored here and the amount of fuel that is depleted is dependent on the strength of the function itself. Also the lesser the fuel, the lesser Franky's total strength is.

During Franky's fight with Fukurou, it has been shown that depending on what fuel he stores, Franky's entire body changes  This includes strength of techniques, hairstyle, and even the mood of Franky himself.

So far, the majority of what Franky has done to his lower body involves functions that are somewhat border line censorship. These functions despite their rude nature apparently provide Franky as much advantage as any other function of his. So far only his legs and butt seem to be modified with functions. While Franky had stated earlier that only his back is the only part of him that isn't modified, apparently not all of his body regions he can reach seem to be modified. This was apparent when he was asked to joined the Straw Hats. He initially refused and got his "treasure" painfully grasped by Robin's Dos Fleur technique in return.

During his fight with Nero, it is revealed that Franky had modified legs and hips so that they can split in half vertically and produce two sets of legs. The front set then is capable of sliding forward to make Franky resemble a 'reverse Centaur'. So far, this is the only modification involving his legs.

While being chained up by Cipher Pol, it is revealed that Franky had modified his butt so that it can expand to gigantic proportions when he all of a sudden inflates it. The purpose of which is to store vast amounts of gas. When released the gas propels himself forward a certain distance depending on the amount released. 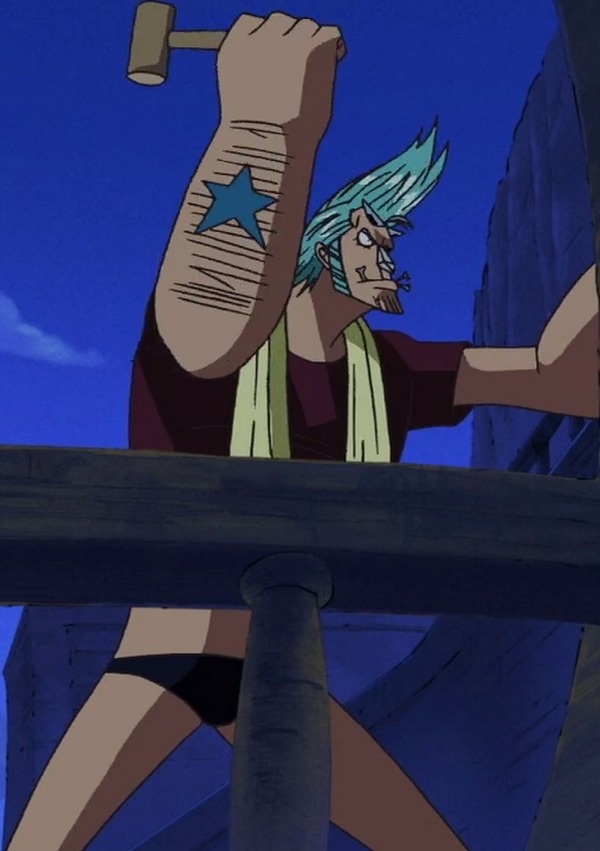